Dr. Nalaka Godahewa on Wednesday spoke at the 37th session of the UNHRC on the seminar topic of ‘The UN’s relentless pursuit of Sri Lanka’. The following are excerpts of his address. 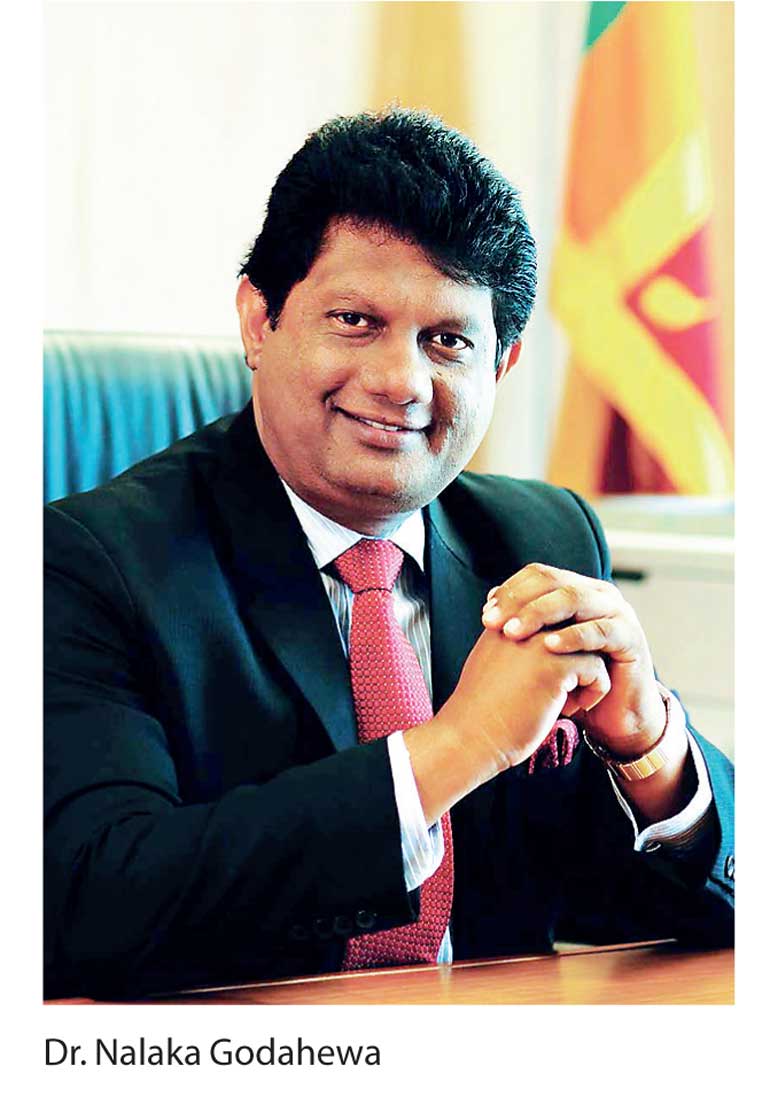 Not long ago Sri Lanka was a victim of terrorism. The people of Sri Lanka were terrorised for almost 30 years by one of the world’s most brutal terrorist organisations the world has ever seen. They were known as the LTTE or the Tamil Tigers. Peace returned to this island nation only in 2009 when the Sri Lankan forces succeeded in defeating the LTTE in an armed battle, thus ending one of the darkest periods in the history of Sri Lanka.

The key objective of the LTTE was a separate state for Tamils in Sri Lanka which they wanted to name Tamil Eelam.

The Tamil Tigers sustained an armed conflict concentrated in the North and East of Sri Lanka for almost three decades. At the same time they engaged in a terror campaign that didn’t spare any part of the country.

The LTTE’s modus operandi was twofold – infiltrating civilian areas and engaging in mass killings in order to create fear and panic amongst public, thus exerting pressure on the government was one of the tactics. The other was periodically attacking the security forces and the military establishment using semi conventional guerrilla attacks.

The LTTE carried out attacks on civilian targets throughout the country using human bombs, vehicle bombs, time bombs, claymore mines and also its military cadres. It was the LTTE which introduced the concept of human bombs to the world in the early ’80s as a means of spreading terror. Hundreds of men, women and children were trained by the LTTE to be suicide cadres. National leaders of two countries, a prime minister of India and a president of Sri Lanka, lost their lives due to the suicide attacks of the LTTE’s human bombs.

Starting in the early 1980s, the LTTE drew out the Sinhala community from the Jaffna peninsula. More than 500 Sinhalese were killed in the attacks carried out in the North and East. More than 200 innocent civilians living in border villages were also killed during this period

According to the 1981 census, 19,334 Sinhalese lived in the Northern Province. However, due to the ethnic cleansing program carried out by LTTE, there were no Sinhalese residents left in these areas by the mid-90s.

The focus then turned to the Muslims. In October 1990, the LTTE ordered over 75,000 Muslims who were living in the Jaffna Peninsula to leave their homes within 48 hours. The LTTE also carried out several brutal attacks on Muslim villages in the North and East, massacring more than 600 civilians.

The attacks on civilian targets in majority Sinhalese areas continued for almost three decades. The LTTE used these attacks to put pressure on the government. They also expected majority Sinhalese to retaliate and attack Tamils living amongst Sinhalese so that they could get international publicity to that effect. But despite continuous attacks on Sinhalese, there was no racial violence in any part of the country since 1983.

But throughout this long period, the international community virtually kept a blind eye. The LTTE stormed through border villages, slit the throats of innocent people, slit opened the bellies of pregnant mothers, exploded bombs all over the country killing civilians, but no human rights organisations came forward to speak on behalf of the victims.

No UN Secretary General thought of appointing a panel to appraise him of the gruesome crimes the LTTE were committing. None of the LTTE’s extra-judicial executions qualified to enter the UNHRC records. No resolution was ever passed condemning the LTTE’s atrocities.

When 600 unarmed policemen who surrendered to LTTE on the orders of the President of Sri Lanka during peace negotiations were killed in a mass murder in 1990 it was not called a war crime by any expert.

The military option to defeat the LTTE was finally chosen after numerous peace talks, negotiations and ceasefires failed. It was never called a war. It was called a humanitarian operation because the government forces were fighting to free Sri Lankan citizens from the culture of terrorism. Close to 300,000 Tamil civilians who were used as a human shield by the LTTE were rescued during this humanitarian operation.

During its hey-day, the LTTE had become one of the most powerful terrorist organisations in the world thanks to its international network of members. This network handled the fundraising activities for the LTTE. In addition, to arms procurement, they also handled the global propaganda for the LTTE. The Tamil diaspora living in western countries were forced to contribute willingly or unwillingly.

This international network of the LTTE was a huge source of funds, which was controlled by a few individuals and organisations. Since the elimination of terrorism in Sri Lanka, the millions of dollars that were spent on arms procurement are no longer required but the funds keep coming. If Tamil Eelam is a forgotten dream that could be the end of a highly lucrative business for some individuals.

Today, the handlers of this business empire have to spend only a fraction of the money they spent on the war earlier, to keep the Eelam propaganda live. With large sums of funds available this group of people, they can continue to lobby powerful politicians and officials whose voices matter globally.

This is the reason why the international community is not allowed to leave Sri Lanka alone. Without most people realising, invisible hands continue to be at work. While the people of Sri Lanka are trying to rebuild a nation devastated by a three-decade long war, the UNHRC is being used as tool to reopen the old wounds.

Not only the international opinion makers but the current government Sri Lanka is also a pawn of these powerful manipulators. The current leadership of Sri Lanka that came to power in 2015 acts as if they have some strong obligation to these radical elements of the Tamil Diaspora. That is why Sri Lanka made history in 2015 by being the only government in the world to co-host a UNHRC resolution against its own country.

It is very important for one to understand that the majority of Sri Lankans are not racists. Our nation comprises Sinhalese, Tamils, Muslims and a few other ethnic groups. The country belongs to all of them. A citizen of Sri Lanka, irrespective of religion, race or creed, should enjoy the same rights and no one should act superior to another.

Unfortunately a few people are trying to create a divide amongst the peace-loving people of Sri Lanka to attain their own objectives. We urge the international community not play into the hands of these isolated groups. Instead of supporting these extremist elements and their sinister agendas try and understand what the vast majority of people in Sri Lanka want. They want peace, they want to live in dignity enjoying equal opportunities and they want economic freedom.

With a written history of more 2,600 years, we are quite capable of looking after our own interests and our people. Therefore, we request the international community not to support sinister agendas of extremist groups to force external solutions on a sovereign nation.

Key Activists attending Kandula Program on a Day Out